After a very early start to the day and breakfast, Shinya, Hiro and Colleen discussed the program for the day. The two farm ladies (Mikako and Maiko) together with Rika from the London Shumei Center, were busily engaged in creating fine Japanese cuisine. It was a blustery day with gale-force winds. Apparently, Storm Hannah had arrived during the night and was lashing the UK with fierce winds and also rain in some parts. 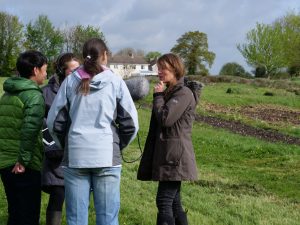 This was to be the very first Natural Agriculture learning programme of the year. So, everyone was excited and eagerly waited for the three participants who were to attend. However, this day was extra-exciting and special; Shinya and Colleen were to be interviewed for the program “On Your Farm”, a BBC Radio 4 show. Around 09h00, the presenter, Verity Sharp, and the producer, Beatrice Fenton arrived and the recording got underway.

At length, the three ladies who were to participate in the course, arrived. All three had come from various areas of London. All three were in the holistic healing professions. Verity and Beatrice stayed for the first presentation of the day where Shinya gave an introduction to Natural Agriculture. A farm tour followed, during which the three participants were also interviewed for the Radio 4 program. 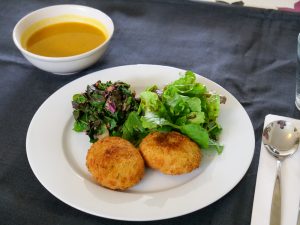 A delicious vegan lunch was next. The ladies had excelled themselves in preparing food made from all Natural Agriculture ingredients. There were potato
croquette, mixed salad leaves, pumpkin soup, Japanese rice and sauces.

After lunch, Verity and Beatrice departed and left Shinya to present the afternoon’s talk on how important soil health is. Colleen did a short presentation on the practicalities of Natural Agriculture. At the end of this, afternoon tea and coffee was served, accompanied by home-made oat cookies which had been freshly baked by Mikako, Maiko and Rika.

Finally, the participants departed for home. Feedback was extremely positive and all remarked that they had been inspired to practise Natural Agriculture gardening at home to produce healthy and delicious food.
It had been a successful day. The broadcast of the interviews follows. Who know what might result from this? Natural Agriculture most definitely is something to be respected and followed.
See everyone next time!

Support Natural Agriculture activities with a contribution of any size

There are no upcoming events at this time.

We are still producing our vegetables but we can not accept any workers or volunteers at this moment to follow the social-distance measure. There are no job vacancies available at this moment.